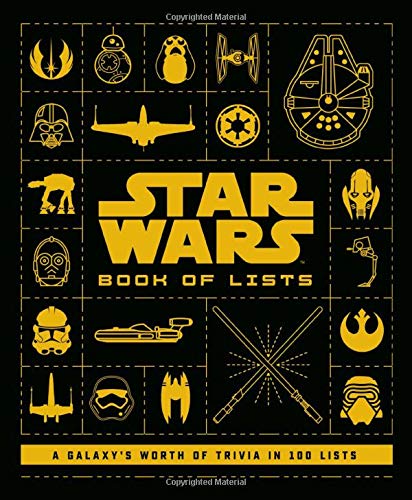 Star Wars: Book of Lists: A Galaxy’s Worth of Trivia in 100 Lists

Star Wars: The Book of Lists takes a fascinating look at the galaxy far, far away through trivia culled from both on-screen and off over the history of the franchise. More than a simple accounting of fan-favorite characters or biggest opening weekends, this book is a compendium of the most compelling facts about the saga and fandom summarized in 100 lists.

Find out these fun facts and more with comprehensive lists covering everything you'd want to know about the characters, creatures, ships, planets, and more:

Compiling a galaxy's worth of trivia and information about the Star Wars Universe, Star Wars: The Book of Lists is an entertainingly accessible trivia format for both hardcore fans and casual viewers.

“The Beast” of Mimban

Han Solo first meets Chewbacca under the worst of circumstances. The Empire punishes deserters by throwing them in a pit with the starving, captive Wookiee. Chewbacca might have been the end of Han Solo, had the smooth-talking scoundrel not convinced him to direct his anger at the Imperials. The duo escapes together and they form a life-long friendship.

Han Solo’s betrayal and capture at Cloud City rightfully angers Chewbacca. The defiant Wookiee begins tossing stormtroopers to the side before Han calms his old friend. Chewie must wait to fight another day.

Betraying Han Solo brings the full wrath of Chewbacca down on Lando Calrissian. Luckily, the scoundrel has a plan to save Solo, if only he can get the words out while being choked at the hands of Chewbacca.

Chewbacca didn’t ask for a porg infestation on the Falcon, but that’s just what he gets after a trip to Ahch-To. The curious little birds make his ship their home, nesting in the hallways, biting at the upholstery, and interfering with Chewie as he pilots the ship at the Battle of Crait. They’re too cute to do anything about, so Chewie can only voice his anger.

CITIES THAT NEVER SLEEP: Planets with the Liveliest Cities or Where the Whole Planet is One City

(The Phantom Menace, Attack of the Clones, Revenge of the Sith, Return of the Jedi )

Coruscant is one giant urban center covering the entire planet. Over the millennia, the city has grown upon itself, rising thousands of levels high. The highest levels now form the surface of the planet and are inhabited by the most elite members of Coruscant society.

Floating among the clouds around the planet Bespin, Cloud City is the stylish community under the watch of its Baron Administrator, Lando Calrissian. The primary industry is tibanna gas mining, which it harvests and refines from the nearby gas giant. Its industrial function is well concealed by the sophisticated lifestyle experienced by most of its citizens who enjoy beautiful vistas and relative peace during the Galactic Civil War.

The galaxy’s most wealthy citizens escape to the casino city of Canto Bight, an artificial oasis built on the planet Cantonica. The lively celebration of wealth attracts some of the most unscrupulous members of galactic high society, including arms dealers who earn their fortunes on the back of war and suffering. Here they find rest, relaxation, and entertainment to fit any species or taste.

“TO ME SHE’S ROYALTY”: The Queens and Princesses

After the Naboo crisis is over, she steps down from her role as queen and becomes Naboo’s Senate representative.

(Attack of the Clones)

Queen Jamillia serves as Naboo’s queen at the outbreak of the Clone Wars. Like other Naboo queens, she is elected to the post for a short reign.

(Revenge of the Sith)

Queen Apailana is just twelve years old when elected Queen of the Naboo. She is the ruling monarch at the end of the Clone Wars, overseeing the former Queen Amidala’s funeral.

(Rogue One: A Star Wars Story, A New Hope, The Empire Strikes Back, Return of the Jedi, The Force Awakens, The Last Jedi, The Rise of Skywalker)

Leia Organa takes many titles through the course of her life, but her first is Princess of Alderaan.

Be the first to review “Star Wars: Book of Lists: A Galaxy’s Worth of Trivia in 100 Lists” Cancel reply